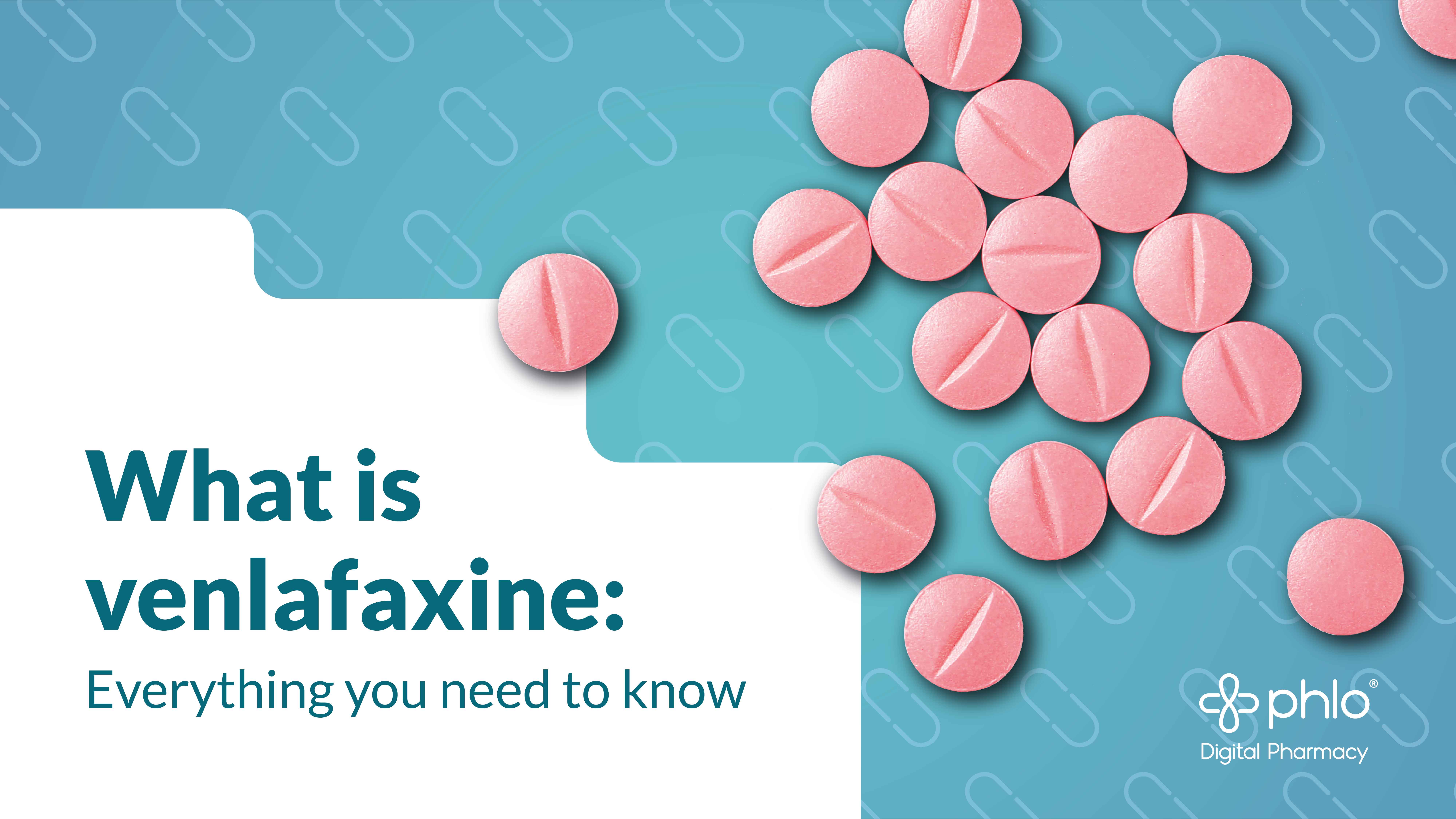 What is venlafaxine: Everything you need to know

In this article, we provide a complete guide to the antidepressant venlafaxine, covering how venlafaxine works, what it’s prescribed for, the side effects of venlafaxine, how long does venlafaxine take to work, and more.

Antidepressant usage and prescribing has seen a steady increase in the latter half of the previous decade. More recently, the outbreak of the pandemic in early 2020 and the negative mental health consequences that ensued have also contributed to higher rates of antidepressant prescribing across the UK population.

For many, starting treatment with antidepressants for the first time can be a daunting prospect, whether you're taking them for anxiety or for depression.

In this week’s blog, we aim to provide a comprehensive overview of venlafaxine.

What is venlafaxine and what is it used for?

Venlafaxine is a type of antidepressant medication that is primarily used to treat depression. However, it is also licensed to treat several anxiety disorders, such as:

Venlafaxine is regarded as a safe and tolerable treatment for a range of mental health conditions and produces fewer and milder side effects compared to older antidepressants.

Venlafaxine belongs to a class of antidepressants called Serotonin and Norepinephrine Reuptake Inhibitors, or SNRIs.

In a previous blog, we discussed sertraline, an example of an SSRI (Selective Serotonin Reuptake Inhibitor) antidepressant. Both medications share a similar mechanism of action.

The name of this class of medication provides clues towards the mechanism of action: venlafaxine works by increasing the levels of the mood-regulating neurotransmitters serotonin and norepinephrine.

How long does venlafaxine take to work?

When prescribed for depression, most antidepressants can begin to work within the first couple of weeks of treatment – and venlafaxine is no exception. While you can expect to see minor improvements within the first two weeks, venlafaxine often takes up to four weeks or even longer to achieve its full effects on depression.

For anxiety, venlafaxine can take longer to work. During the initial few weeks of treatment, you may also notice increased anxiety. Eventually, your anxiety will decrease, and you will start to feel better.

How to take venlafaxine

How and when you take venlafaxine depends on the reasons why you are taking it. Always follow your doctor’s guidance and recommendations.

As a rule of thumb, venlafaxine is generally taken once or twice per day, and it’s recommended that you take it with food, so that you avoid feeling nauseous.

Like with other antidepressants, you are likely to be prescribed a lower dosage for a few weeks to help your body adjust to the medication. Generally, the starting dosage of venlafaxine is 75mg per day, which can be gradually increased up to 375mg if required.

It’s important to take your antidepressants at the same time every day. Venlafaxine may also impair your sleep – if you already struggle to get to sleep you should consider taking venlafaxine early in the morning.

How long do I need to take venlafaxine for?

How long you need to take venlafaxine for will vary based on the reason why it has been prescribed to you. For depression, it’s recommended that you keep taking venlafaxine for a period even after you start to feel better, to prevent your symptoms from returning.

For other conditions such as anxiety, your GP might recommend that you continue taking venlafaxine for longer periods of time after you start to feel better.

Side effects of venlafaxine

Like any other medication, venlafaxine comes with certain side effects, especially in the initial phases of treatment.

However, the good news is that most people will only experience mild side effects (or none at all) and these are expected to gradually subside and disappear as your body gets used to the medicine.

Common side effects of venlafaxine include:

Venlafaxine can also produce rarer, more serious side effects. For a full list of side effects, please consult this article.

How does venlafaxine make you feel

Antidepressants such as venlafaxine will not make you feel like a different person or cause feelings of excessive “artificial” happiness, and also will not alter your personality.

You can expect venlafaxine to provide a gentle mood lift and stabilise your mindset.

How to come off venlafaxine

It’s important that you consult with your GP before stopping venlafaxine. Never stop taking venlafaxine abruptly – not only will this increase the chances of your symptoms returning, but you might also experience negative symptoms akin to withdrawal symptoms – called discontinuation syndrome.

If you agree with your GP to stop taking venlafaxine, your GP will recommend that you gradually decrease your dosage over time.

If you would like to learn more about venlafaxine, please consult the NHS website for more detail, including advice on cautions, serious side effects, pregnancy, breastfeeding and how to get help or advice when required.

Do you have more questions about venlafaxine? Get in touch with our pharmacy team to speak to a knowledgeable pharmacist that will be able to answer any further questions.